In a Post-Pandemic Era, is Coughing on Someone an Assault?

Does coughing on a person constitute an assault under the Criminal Code? Alberta’s provincial court has ruled that it does in R. v. Pruden, 2021 ABPC 266.

In this case, the trial judge had to resolve the unique issue of whether the cough by Mr. Pruden, after removing his mask, in close proximity to the complainant, during the COVID pandemic, was a non-consensual application of physical force, an assault.  In other words, does the cough constitute an application of force.

This case is different from other cases where a cough accompanied by a discharge of saliva or blood has been considered an assault. Here, there was no visible bodily fluid that came from Mr. Pruden’s cough.

The Crown argued that the discharge of Mr. Pruden’s lung air in the proximity to the complainant amounted to an application of physical force. Additionally, the Crown argued that Mr. Pruden acted intentionally when he coughed in close proximity to the complainant, at a time where he knew or should have known of societal concerns with respect to airborne transmission of COVID.

On the other hand, the defence argued that the evidence did not prove beyond a reasonable doubt that Mr. Pruden acted intentionally nor did the cough constitute as force. The defence further made submissions on using the criminal law to enforce standards of behaviour during the pandemic. They argued that the criminal law is too blunt of an instrument to criminalize the act of coughing, which produces droplets that are not visible to the naked eye, which may be contaminated by COVID. The defence argued that these types of incidents should proceed through regulatory legislation, rather than through the criminal justice system.

With respect to the defence’s policy argument, the Court expressed that it was not within their jurisdiction to question the decision of laying charges pursuant to the Criminal Code or any other legislation.  Instead, their role is to apply the existing law to the facts found at trial. As such, the issue remained whether Mr. Pruden’s cough constituted as force to make out the charge of assault.

The trial judge held that the term force used in the Criminal Code includes “a force created by the movement of gas molecules which are inhaled and exhaled during the course of taking air into the lungs and expelling air from the lungs”.  In other words, air pressure is physical force but at the molecular level.  Consequently, when Mr. Pruden intentionally removed his face mask and coughed in close proximity to the complainant, he emitted force consisting of lung air molecules into the atmosphere.  As a result, Mr. Pruden was guilty of assault by coughing.

This is an interesting case coming out of Alberta which likely would not have ended up in a criminal court had it not been for the pandemic. Although this decision is not binding on BC judges, it will be interesting to see if our courts find this decision persuasive and follow a similar approach during this sensitive climate. 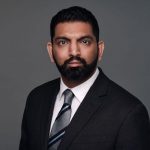